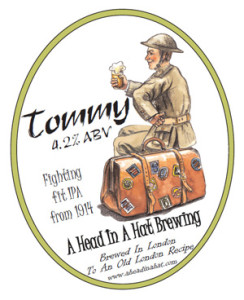 The lovely story behind A Head in a Hat Brewery is that all the beers are a “recreation”. They give beer drinks a taste of history as each beer is developed from an original recipe. Take Tommy for example, a “traditional” IPA taken from a 1914 recipe. It breaks the myth that all IPAs are strong and at just 4.2% breaks the mould of an IPA, but without comprising the flavour. The popular story goes that an IPA was made stronger so that it could survive the long and arduous travel across the seas. Tommy has that same vibrant orange colour of modern day IPA and uses just as many hops.

I love an IPA, it is probably my favourite type of beer, however several of them being made at the moment are a very high ABV and thus very costly in the pubs. Tommy is on the lighter side but still maintains all the things I love about an IPA. My one criticism and not really a massive problem is that I find it slightly bitter than a modern day IPA, which has sweet grapefruit and mango aromas. That being said this beer is taken from a 1914 IPA recipe which is an impressive thing in itself.